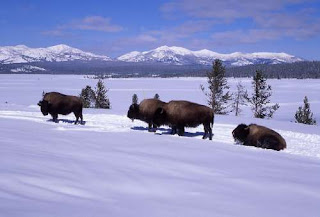 Currently, park staff are making an effort to locate and recapture the bison. At this time, none of the animals have been located.

The missing bull bison were being held in two separate pens. A group of 24 animals have been in confinement since March 2016 and the other group of 28 animals, since March 2017. These animals were being held and tested for brucellosis at Stephens Creek as part of a plan being considered to establish a quarantine program. The purpose of that program would be to augment or establish new conservation and cultural herds of disease-free plains bison, enhance cultural and nutritional opportunities for Native Americans, reduce the shipment of Yellowstone bison to meat processing facilities, and conserve a viable, wild population of Yellowstone bison.

“This is an egregious criminal act that sets back bison conservation. It delays critical ongoing discussions about a quarantine program and the transfer of live Yellowstone bison to tribal lands. The park is aggressively investigating this incident,” said Yellowstone National Park Superintendent Dan Wenk.

"I am absolutely heartbroken for the Fort Peck Tribes who have been working with the park, the state of Montana, and Animal and Plant Health Inspection Service for years to repatriate these bison," said Secretary Zinke. "The criminals who broke into a national park facility to release these bison put at risk the safety of the animals that are now at risk of being culled and our park rangers who are rounding them up. I will be working with Secretary Perdue to see if we can get back on track to transfer the brucellosis free bulls to the tribe this year."

The Stephens Creek facility is closed permanently to the public.

Anyone with information about this incident is encouraged to call the Yellowstone National Park Tip Line at 307-344-2132. For more information, visit http://go.nps.gov/tipline.