69 RTP applications were received this year from a variety of eligible applicants, including federal and state agencies, towns, cities, counties, and private trail clubs and organizations.

The funds are appropriated to the states through legislation passed by Congress called the FAST Act (Fixing America’s Surface Transportation) that provides funding for the program through 2020. The Recreational Trails Program current awards total approximately $1.66 million in federal funds. Funds have been approved and will be allocated to the highest-scoring 54 projects based upon their relative scores and State Trails Advisory Committee recommendations.

Foys to Blacktail Trails Inc. secured the $90,000 award to complete the trail connector between Herron Park and Blacktail Mountain. Building the final segment of the Foy’s to Blacktail Trail is the culmination of 16 years of persistent work by Flathead County and the volunteer-driven nonprofit Foy’s to Blacktail Trails (FTBT), formed in 2001 with the goal of preserving historic CCC trail linkage between Herron Park and Blacktail Mountain. Bridger Ski Foundation received $70,000 to assist with upgrading trail grooming equipment and West Yellowstone Ski Education Foundation received $60,000 to complete trail improvements and provide additional connector trails on the popular Rendezvous trail system.

The RTP Program awards grants through an annual competitive application process. Projects can range from construction and maintenance of trails, development of trailside and trailhead facilities, avalanche education and trainings, and interpretive programs.

A new report concludes that visitors to Grand Teton National Park in 2016 spent an estimated $597 million in local gateway communities. The ripple effects of that spending had a cumulative benefit to the local economy of over $779 million and supported 9,365 jobs in nearby communities. The overall economic impacts of visitor spending during the National Park Service Centennial year increased seven percent from 2015 levels.

Grand Teton National Park Superintendent David Vela said, “In 2016 park staff and the global park community welcomed over 3.3 million recreational visitors to Grand Teton National Park. Visitors from around the world experienced all that this majestic place has to offer while contributing significantly in economic benefits to our nearby communities.”

The peer-reviewed visitor spending analysis was conducted by economists Catherine Cullinane Thomas of the U.S. Geological Survey and Lynne Koontz of the National Park Service. The report shows $18.4 billion of direct spending by 331 million park visitors in communities within 60 miles of a national park. This spending supported 318,000 jobs nationally; 271,000 of those jobs are found in these gateway communities. The cumulative benefit to the U.S. economy was $34.9 billion.

Park staff investigated the situation and concluded the wolf was in shock and dying from the injuries. “Staff on scene agreed the animal could not be saved due to the severity of its injuries. The decision was made to kill the animal and investigate the cause of the initial trauma,” said P.J. White, Chief of the Wildlife and Aquatic Resources Branch. At this time, the nature of the initial injuries is unknown. An investigation into the cause of the injuries has begun which will include a necropsy.

Park staff identified the wolf as the white female of the Canyon Pack, one of three known white wolves in the park. This wolf lived to 12 years, twice the age of an average wolf in the park and had a broad range that extended from Hayden Valley to the Firehole River area to the northern portion of the park. For these reasons, the wolf was one of the most recognizable and sought after by visitors to view and photograph.

Anyone with information about this incident is encouraged to call the Yellowstone National Park Tip Line at 307-344-2132. For more information, visit http://go.nps.gov/tipline.

The park will provide more information about the investigation when it is available.

I realize that we're still a few weeks away from the first day of summer. I'm just reusing the title that Finley Holiday Films used for their outstanding short film highlighting Grand Teton National Park. This excellent short video shows what this beautiful park looks like in June as the snow melts, and the wildflowers and wildlife begin to emerge from a long winter:

With more than 240 miles of trails meandering throughout the park, hiking is the absolute best way to see Grand Teton National Park. Fortunately the park offers a wide variety of outstanding day hikes. If you do plan to visit Grand Teton this year, please note that our hiking website also offers a variety of accommodation listings and other things to do to help with all your vacation planning.

Thompson was snowboarding in the park’s backcountry with three companions after exiting an open backcountry access gate at the Jackson Hole Mountain Resort ski area. Thompson was traversing across the top of Air Force Couloir when the slab broke above him. The sliding snow carried him approximately 1,000 feet downhill until he came to a rest atop the snow. Thompson suffered injuries during the fall due to collisions with rocks.

One of Thompson’s companions called Jackson Hole Mountain Resort ski patrol around 11:30 a.m. shortly after the slide. Ski patrol launched initial rescue efforts and called the Teton Interagency Dispatch Center as the incident was within park boundaries. Three ski patrollers skied down to Thompson’s location with a rescue toboggan and medical gear. They assessed Thompson’s condition and prepared him for ski-toboggan transport to the bottom of Granite Canyon and eventual aerial rescue.

Meanwhile, park rangers met the Teton County Search and Rescue helicopter and prepared to fly to the patient. With two park rangers on board, the helicopter landed near Thompson’s location and the rangers brought him aboard. Thompson was flown out to a temporary staging area along the Chapel of the Transfiguration road at 1:47 p.m., just as deteriorating weather conditions made visibility increasingly difficult. Thompson was transferred to a park ambulance and transported to St. John’s Medical Center in Jackson, Wyoming.

The avalanche crown left behind was six to twelve inches deep and measured 30 to 50 feet across. Rangers caution backcountry recreationists that recent snow squalls have deposited pockets of unstable snow at high elevations in the Tetons. Relatively small avalanches can still have serious consequences as they can carry victims long distances over terrain that can include trees, rocks, and cliff bands.

Thompson’s group was aware of the avalanche hazard for the day, which was listed as moderate by the Bridger-Teton Avalanche Center. They were adequately equipped for winter backcountry travel, wore helmets, and carried avalanche beacons, shovels, and probes.

Is June a good time to visit Glacier National Park?

Shhh! Don't tell anyone, but June is really a great time to visit Glacier National Park! Obviously July and August are by far the most popular months for visiting the park; however, if you wish to avoid the crowds, you may want to check-out the month of June. Sure, the Going-to-the-Sun Road likely won't be open all the way to Logan Pass until later in the month, but that doesn't mean there aren't plenty of things to do. In fact, all of the services outside of the park, as well as almost all of the concessioners within the park, will already be open. 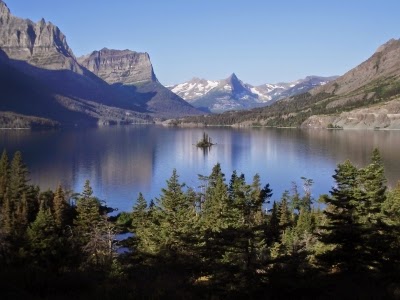 So why visit in June? For one, June is an absolutely great time for observing wildflowers. Whitewater rafting is also at its best during this time period. Other popular activities include horseback riding, fly fishing, and as a result of far fewer motorists on park roads, June is also a great time for cycling. And there's nothing like taking a cruise on one of Glacier's lakes to soak in the splendid beauty of the snow-capped mountains. For more information on many of these activities and others, please visit our Thing To Do page.

Although the nights are still relatively cool, temperatures usually reach into the 70s during the day, which makes for nearly perfect hiking conditions. While trails in the higher elevations will still be closed due to snow, there are still a ton of great hiking opportunities around the park. Here are just a couple of suggestions (many of which are normally part of the June ranger-led hikes program - which, by the way, are free):


And in case you need one more reason to visit in June: rates on accommodations are much lower when compared to peak season! If you do plan to visit Glacier this June, or anytime throughout the year, please note that our hiking website also offers a wide variety of accommodation listings to help with all your vacation planning.