Visitors Hit by Lightning in Glacier are in Serious Condition

The three individuals that were hit by lightning yesterday are in serious but stable condition, and are anticipated to remain in the hospital for several days.

A 23-year old male from Kalispell, a 23-year old female from Missoula, and a 11-year old boy were hit by lightning late Wednesday afternoon as they were on the St. Mary Falls Trail on the east side of Glacier National Park. The three individuals are not family members, but were recreating together.

Several visitors in the proximity of the incident stated they quickly responded to the scene and successfully administered CPR to all three victims. It is believed that all three victims were unconscious and not breathing. 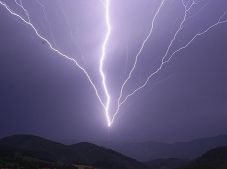 Park rangers believe there are no witnesses with a first-hand account of the incident, other than the three victims. Several park visitors located in other areas on the east side of the park communicated that they believe they saw one or two lightning strikes in the area of the incident. The area of the incident did receive a small amount of rain and wind late Wednesday afternoon, as a weather system quickly moved through the park.

Park dispatch received a call at approximately 4:30 p.m. Wednesday from a park interpretive ranger reporting that a group of hikers was believed to have been hit by lightning on the St. Mary Falls Trail. The group was approximately three quarters of a mile from the trail head. Nearby visitors indicated that they initiated CPR and first aid to the victims as park rangers responded to the scene.

ALERT helicopter from Kalispell and Mercy Flight helicopter from Great Falls were requested, and park medics were flown to the scene. Park crews and employees from all areas of the park responded to the incident. Park employees, Glacier County Sheriff's Office personnel and other visitors used litters to hand carry each individual to the trailhead near the Going-to-the-Sun Road. Glacier County Sheriff's Office personnel helped with traffic control on the road. The road was temporarily closed for the incident.

ALERT responded and Mercy Flight was unable to respond due to weather. Glacier County Ambulance from Babb and Browning Ambulance were called and arrived at the scene.

The incident is under investigation by the National Park Service.


Jeff
Hiking in Glacier.com
Posted by The Smoky Mountain Hiker at 7:12 PM