The following is a short excerpt from my new book, Ramble On: A History of Hiking:

For women, hiking attire during the Victorian Era was an extremely complicated affair. The subject was frequently discussed and debated throughout the pages of Appalachia during the first decade of the Appalachian Mountain Club. The December 1887 issue of Appalachia ran a lengthy article by Mrs. L. D. Pychowska on the “walking-costume for ladies.” It provided head to toe advice on how women should dress for a hike. This included wearing a grey flannel trouser beneath two skirts. The under skirt, which reached to just below the knee, was also to be made of grey flannel. The outer skirt, however, was to be made of winsey or Kentucky jean, both of which were considered to be strong enough to withstand tears from walking through briers and undergrowth. The outer skirt was also meant to be worn to ankle length. However, if the hiker were to find herself climbing steep terrain she could simply pull out a strong clasp pin and raise the skirt higher, “washwomen fashion,” until the difficult section was completed. “Basquines,” or corsets, were optional apparel according to the author. At the end of the piece the writer assured her readers that her recommendations on female tramping attire would be “sufficiently presentable to enter a hotel or a railroad car” after a long tramp through the woods, “without attracting uncomfortable attention.” 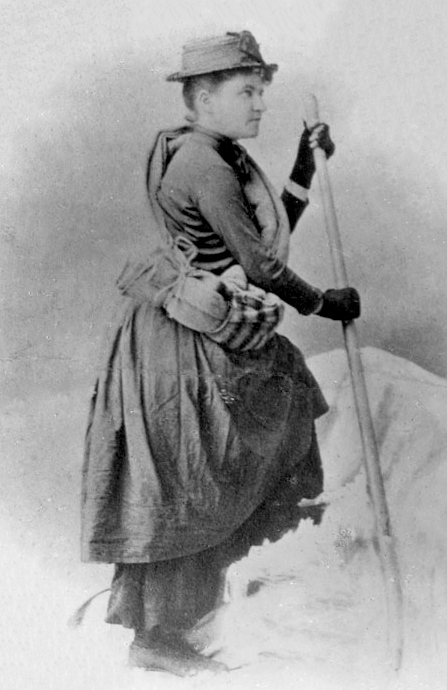 The true realities of wearing a “costume” such as this were not considered or debated in Mrs. Pychowska’s article. Conversely, a passage in an article from the June 1877 issue of Appalachia put an exclamation point on the true dangers women faced as a result of the clothing they were forced to wear while tramping. The author related the story of a guided hike on Mt. Washington during the prior year. While descending Tuckerman Ravine one of the ladies in the group paused momentarily to stand atop a large rock above a 25-foot outcrop. Unbeknownst to the hiker, her tattered dress had become caught on a sharp protrusion on the rock. When she attempted to jump to another large rock the snag violently jolted her back, and left her dangling upside down above the abyss. Fortunately her mountain guide was nearby and was able to pull her to safety before falling. 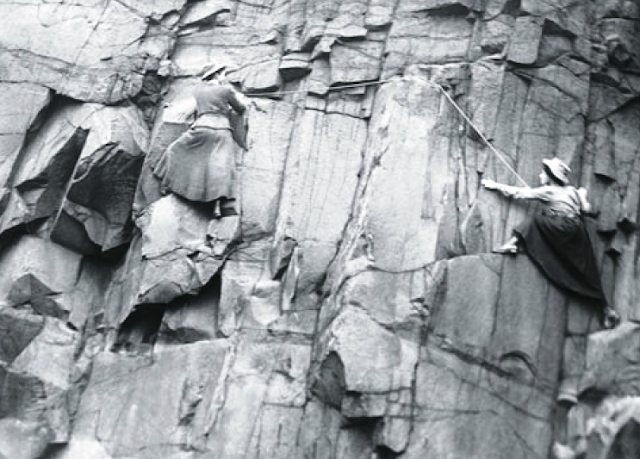 In one particular instance the burdensome attire that women were expected to wear may have been at least partially responsible for the death of one hiker. On September 13, 1855, 22-year-old Lizzie Bourne of Kennebunk, Maine became the first woman to die while climbing Mt. Washington, and quite possibly the first woman to die while hiking in America. On that late summer day Lizzie had planned to hike to the Tip Top House atop Mount Washington with her uncle George and her cousin Lucy. As a result of early morning rain, however, the trio was forced to postpone the start of their trip. Just after lunch the weather finally cleared and they set out by trekking up the partially completed carriage road. However, as they continued towards the summit of the peak, the threesome encountered another round of bad weather while proceeding along the Glen House Bridle Path, which continued to worsen as they climbed higher. In a letter to the Boston Journal, which was intended to provide “a correct account of the whole affair,” George Bourne attested that as they ascended towards the summit, “Elizabeth began to show signs of weariness, and needed assistance.” As night fell upon the mountain, darkness and fog completely obscured the view of their destination. Fatigue had also crept in on each of the hikers. Not knowing where they were, or how far they were from their destination, the trio made the decision to lie down on the trail and wait out the night. Despite building a wind break from nearby rocks, George was convinced that each of them would perish due to the extreme cold and the violent wind. Indeed, that night, around ten o'clock, Lizzie quietly passed away while lying on the trail. In his letter to the Boston Journal, Bourne stated that it was “evident that Elizabeth did not die from the cold alone, but from some organic affection of the heart or lungs, induced by fatigue and exposure.”

With the arrival of daylight the next morning George and Lucy tragically discovered that they were within sight of the Tip Top House. Had they known that they were that close they could’ve easily made it to safety, and Lizzie likely would’ve survived. After her death tourists and hikers began piling stones on the spot where Ms. Bourne died. A stone monument now stands on that same spot to mark and commemorate her passing.

Did Lizzie’s attire contribute to her death? Perhaps. She wore a heavy skirt, petticoat, pantaloons and stockings. Nicholas Howe, author of Not Without Peril: 150 Years Of Misadventure On The Presidential Range Of New Hampshire, estimates that Lizzie may have worn as much as 45 yards of fabric! When this outfit became soaked in cold rain there’s no doubt this would’ve weighed her down, resulting in more stress on her heart, and certainly would have accelerated the effects of fatigue, exposure and hypothermia.

While Mrs. Pychowska was espousing the benefits of wearing the proper costume to coincide with the mores of the Victorian Era, there was a long debate, at least among female members in the Appalachian Mountain Club, about what women should wear while hiking. During the May 9th meeting chronicled in the June 1877 edition of Appalachia, a Miss Whitman suggested that skirts be designed in a manner so that they “could be shortened to any necessary extent by rolling it up.” A Mrs. Nowell discussed the “disadvantage of ladies on mountain excursions on account of their long skirts, and recommended the use of gymnasium dresses or something similar, as an outside garment for such occasions.” In that same edition of Appalachia, Mrs. W.G. Nowell, one of the founding members of the club, and presumably the same Mrs. Nowell who spoke out during the May 9th meeting, published an article titled, “A Mountain Suit for Women.” In this piece Harriet Nowell once again took issue with the garb women were expected to wear during this era. She also mentioned the discussions she had with other women about the impracticalities and dangers of women’s hiking attire. Apparently they had carefully deliberated over what their alternatives were, and presented one possible solution: “The only thing we could think of was a good flannel bathing suit.” Mrs. Nowell continued by stating that they “could not see why it should be more improper to wear this” suit while hiking, “than it would be along a crowded and fashionable beach.” She went on to make the point that women would be “relieved of the excessive weight of her ordinary dress,“ thus allowing them to carry their own gear. She concluded her piece by declaring that “Our dress has done all the mischief. For years it has kept us away from the glory of the woods and the grandeur of the mountain heights. It is time we should reform.”

An article published on the Tramp and Trail Club of Utica website notes that by the 1920s women had solved the problem of impractical skirts by stuffing them in knapsacks once they had reached the trailhead, and then putting them back on before returning to town. Bold and daring women eschewed skirts altogether and simply wore knickers with long socks from their home. An online exhibit on the Museum of the White Mountains at Plymouth State University website, titled, Taking the Lead: Women and the White Mountains, notes that skirts had virtually disappeared by the mid-1910s, and by the 1930s women were wearing clothes similar to what female hikers wear today, including shorts and halter tops.

Ramble On: A History of Hiking chronicles the history of the first hikers, trails and hiking clubs, as well as the evolution of hiking gear and apparel, including many other stories about the attire both men and women wore during the early years of the sport. You can find the book on Amazon by clicking here.