A 17-year-old male was attacked by a bear south of Ennis on Sunday. He fortunately survived the attack with relatively minor injuries.

The teen and his family were visiting their cabin in Wolf Creek, about 30 miles south of Ennis, on the east side of the Madison Valley. He was out looking for shed antlers in the area. 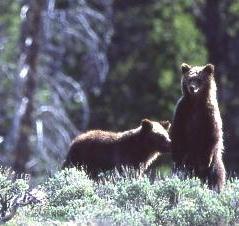 According to the teen, he was walking down a hill around 2 p.m. when he heard a “thump” behind him. He turned around to see a bear charging at him. The teen was carrying bear spray, but he was unable to deploy it immediately because of the bear’s rapid approach. The bear pushed him up against a tree and held him there momentarily. When the bear let go, the teen fell over and attempted to crawl between two trees and protect his head and vitals. The bear then pinned him face-down on the ground. The teen, who was wearing a hoodie and a backpack, said he was able to reach over his shoulder and spray the bear with bear spray, and the bear left.

The young man began walking out and made radio contact with his family. He was treated for his injuries at Madison Valley Medical Center and later released.

FWP was notified of the attack at 3:45 p.m. Based on the teen’s description of the bear’s behavior, the bear was mostly likely a grizzly bear. FWP has notified people who live in the area of the attack. The area has very limited public access and does not get many visitors.

The bear’s behavior in this incident appears to be typical of surprise close encounters. FWP will continue to monitor the area, which is well within occupied bear habitat. The investigation is ongoing, but no further management action is being taken at this time.

FWP reminds everyone to be cautious when in the field as bears are active during the spring, summer and fall months. Some recommended tips for avoiding negative encounters with bears include:

• Be prepared and aware of your surroundings.
• Carry and know how to use bear spray.
• Travel in groups whenever possible.
• Stay away from animal carcasses.
• Follow U.S. Forest Service food storage regulations.
• If you encounter a bear, never approach it. Back away slowly and leave the area.