Just south of Glacier National Park, across U.S. Highway 2, is the Bob Marshall Wilderness Complex. This massive expanse extends for 60 miles along the Continental Divide within the Flathead, Lolo, Helena, and Lewis and Clark National Forests, and includes the Great Bear, Scapegoat and the Bob Marshall Wilderness areas. The complex, encompassing more than 1.5 million acres, forms the third largest wilderness area in the lower 48. 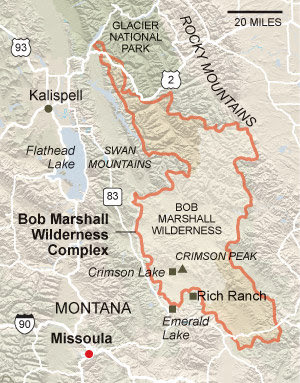 By far the largest of the three wilderness areas in the complex is the Bob Marshall, also known as the “Bob”, which includes more than 1 million acres, and is considered to be one of the most completely preserved mountain ecosystems in the world. Counting more than 700 wilderness areas in the National Wilderness Preservation System, the Bob is the 19th largest wilderness in the United States, and the 5th largest in the lower 48.

The preserve is named after Robert "Bob" Marshall, a forester, conservationist, writer, wilderness activist, and one of the principal founders of The Wilderness Society. As the head of recreation management in the Forest Service in late 1930s, Marshall was the first to suggest a formal, national organization of individuals dedicated to the protection of primeval land. Twenty-five years after his death, Congress passed the Wilderness Act of 1964 which protected nine million acres of federal land from development. As part of this key legislation the Bob was among the original wilderness areas set aside for preservation.

In addition to the “Bob”, Mt. Marshall in the Adirondacks is also named in his honor.

Elevations in the complex range as low as 4000 feet, to 9411 feet at the summit of Red Mountain in the Lewis and Clark Range. Perhaps one the most impressive feature of the wilderness, at least from a geological standpoint, is the long limestone escarpment known as the Chinese Wall. Part of the Continental Divide, the wall extends for 22 miles, and has an average height of more than 1000 feet. From the Haystack Mountain area west of the Divide the view of the escarpment is virtually unbroken for almost 20 miles.

Due to its geography, pacific maritime weather provides ample moisture, resulting in lush, dense forests on the west side of the Continental Divide. However, the eastern side of the Divide has a much drier climate, and is much more characterized by open country.

As you may have already guessed, the Bob Marshall Wilderness Complex is a hiker paradise. In fact, its home to more than 1700 miles of trails, and offers numerous recreational opportunities for day hikers, backpackers, horseback riders and cross-country skiers. Some of the more popular day hikes can be found in the Sawtooth Range near Choteau, Marion Lake near Essex, Stanton Lake near Hungry Horse, Jewel Basin near Big Fork, and Holland Lake near Condon, Montana.

Although there are no paved roads that bisect the interior of the Bob, the wilderness can be accessed by roads surrounding the complex. To the north is U.S. Highway 2; to the east are U.S. Highways 89 and 287; Montana Highway 200 to the south; and Montana Highway 83 to the west.

Jeff
Hiking Glacier National Park
Posted by The Smoky Mountain Hiker at 7:50 AM